Dads Are Better at Bedtime Stories – Here’s Why

For one thing, dads just seem to be genetically more fun (or perhaps just more adept at playing the fool); an inborn ability which lends itself well to the theatrics necessary for captivating narration – like their well-honed cache of character impressions, aided by a sonorous, comically varied, vocal range. 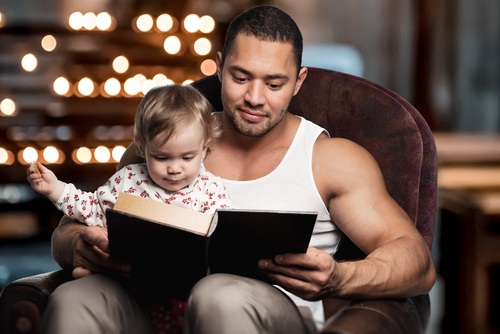 (Or it might simply be that come 7pm, after an entire day spent appealing to a toddler’s non-existent better judgement, assuaging bad tempers and mediating tantrums, mum’s not so much in the joking mood.)

And according to science, I’m not wrong; fathers are more suited to regaling their little audience with stories and poring over pages of fantasy together — but for a reason besides the obvious entertainment factor – complete with ridiculous, giggle-inducing falsetto.

A new study by Harvard University researchers reveals that kids who are read to by their dads have better-developed language skills than those who only had mums playing storyteller.

Dr. Elisabeth Duursma, the lead author on the research project, explains:
“When we looked more closely at what was happening during book reading interactions, we found that fathers used more abstract and complex language.

“When sharing a book with their child, they would often link events in the book to a child’s own experience. For example, when a ladder was discussed in the book, many fathers mentioned the last time they had used a ladder to climb up on the roof or use it for their work. Mothers did not do this. Mothers focused more on the details in the book and often asked children to label or count objects or identify colours.”

Dr. Duursma notes that in general, fathers interact with their children differently than mothers and that those differences can have significantly positive effects; dads roughhousing with kids, for example, syncs physical action and mental concentration and helps young ones learn to regulate themselves.

Of course, the biggest benefit young ones get from enjoying a book with Dad (or playing WWE on the carpet) is an attentive parent; and that sacred one-on-one time – even for just the duration of a Dr. Seuss book – which implicitly says,

So get reading, Pops.

Or, you know, perfecting that body-slam.