I always thought that the whole baby first word thing would be this obvious moment where my little lovely would articulate “mummy” or “daddy” in a voice as clear as a bell. Apparently that is not the case – with my child at least.

At 16-months-old, my daughter says a couple of things (I think); Tigger sounds like “tidd-u”, circle sounds like “sick-u”, yay miraculously sounds like “yay” and daddy is “da-da”.

She says “ma-ma” but in relation to pretty much anything, including the window, the computer and her food.

She roars like a lion when she hears the word “lion” but also when just about any other animal enters her field of vision, and she can “sss” like a snake.

Although my daughter doesn’t say much – well actually, she says a lot but I have no idea what 90 per cent of it means – she certainly understands a great deal. 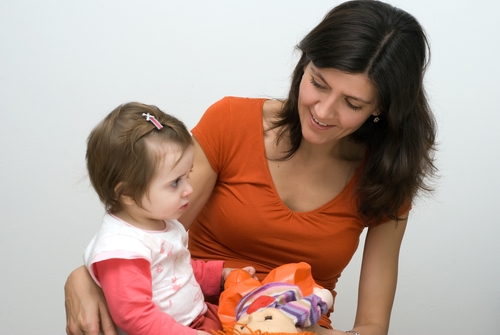 BabyCenter.com says that between the ages of 19 to 24 months, although a baby will probably only say about 50 to 70 words, he or she may understand as many as 200 words, many of which are nouns.

Between 18 and 20 months, he’ll learn words at the rate of 10 or more a day (so watch your language!). He’ll even string two words together, making basic sentences such as “Carry me.”

All this talk of talk is really exciting; I can’t wait to know the thoughts that occupy Amelia’s brain space.

Whether or not she meets the magic 50 word mark in three months’ time is kind of irrelevant – I know that she’ll develop at her own pace and I’ll certainly enjoy the process.

Dear Amelia, bring as many “stick-ums” as you’ve got.