Don’t Blame It All on Hormones – Baby Blues Can Hit Dads Too.

The baby blues and postpartum depression have always had a strictly maternal association. After all, it’s all about the hormones, right?

But new research disproves not only the assumed purely physiological basis of depression after baby – but also its apparent limitations to just the female gender. 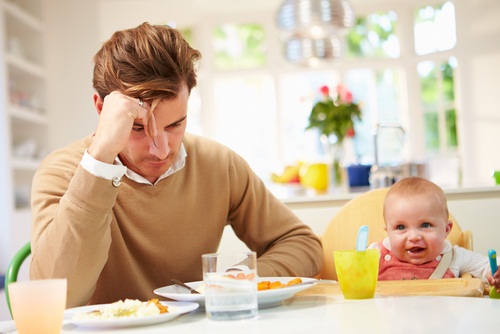 Any parent, new or seasoned, will tell you that having a child changes your life forever. The seeming cliché goes beyond the sentimental; becoming the custodian of a human being entirely separate from yourself can be incredibly stressful, downright scary, even – and not just for mums.  A new study published in the American Journal of Men’s Health shows that dads can be affected as well, with a significant number reporting feeling distinctly ‘down’ during their partner’s pregnancy.

Researchers measured the level of depressive symptoms of 622 first-time fathers during their partner’s third trimester of pregnancy. Suprisingly — over 13 percent exhibited symptoms of depression, despite the obvious fact that they aren’t subjected to the hormonal fluxes that pregnant women are.

“While hormones play a role in maternal pregnancy and/or postpartum depression, it’s important to note that research has also shown environmental, i.e. economic status, and psychosocial factors, i.e. stress or low social support, are also related,” lead author Deborah Da Costa, Ph.D., a researcher in the division of clinical epidemiology at the Research Institute of the McGill University Health Centre in Montreal, Canada, and associate professor in the university’s Department of Medicine, tells Fit Pregnancy.

Bringing a baby into the world isn’t just about surmounting a physical feat; the event, and everything that comes after, is a massive psychological challenge for both the newbie mother and father, too.  “Both men and women go through an important transition as they enter the parenting role,” Da Costa says. “There are changes to personal identity, the couple relationship, the work-life role. While most people can adjust well, some have a more difficult time.”

Risk factors that make some dads more likely to get stuck in a depressive state, she says, include financial worries, experiencing other stressful life events like the loss of a job or illness, not having a strong support system, feeling less satisfied in their couple relationship, and having poor sleep quality. “These factors, particularly the sleep, will likely get worse after the baby is born,” Da Costa says. “It is important for men to learn strategies to improve sleep and better cope with stress prior to their baby’s birth.”

If fathers caught up in this common scenario fail to get help, it can have long-term effects on the whole family. “Paternal depression [during pregnancy] is a strong predictor of depression for men within the first six months following their baby’s birth,” Da Costa says. It can negatively impact the couple relationship and bonding with the baby, and even lead to substance abuse, she says. Plus, “research has shown that paternal depression occurring during pregnancy or in the early months of the infant’s life may also negatively affect the child’s behavioral, emotional, cognitive and physical development.”

In addition, there’s the classic case of the vicious circle; depression in dads can also contribute to maternal depression—and vice versa. “In our study, we found that men were more likely to report depressive symptoms when their partner was experiencing more depressive symptoms during their pregnancy,” Da Costa says. “Other research has shown that this relationship extends to the postpartum period as well. When one partner is depressed, the other should also be screened.”

If your partner is the typical strong and silent type, he’s not necessarily going to pour his heart out and risk putting extra pressure on you. Da Costa explains the telltale signs to look out for: “If he looks down, anxious, quickly gets agitated or loses his temper, doesn’t want to do things he or you used to enjoy together, and acts more quiet or withdrawn.”

“Men report feeling frustrated by the lack of inclusion, involvement and information specifically targeting fathers; moreover, men tend to feel that their emotional and psychological needs are neglected, and often report being excluded from discussions when attending antenatal visits with their partner,” she says. Remember that you’re in this together, so it’s important to make a point to include your partner and be attuned to his needs.

And of course, we do it for the kids, too. A taxed parent can’t do the job justice.

“We also need remember that this is a transition for men as well and if we want them to be well equipped to support their partner and be ready for their parenting role, we need to ensure that they are mentally healthy.”