Eggs are the Best Breakfast for Your Kids, says Study

It’s one thing to instil in your kids that breakfast is the most important meal of the day, but the point of it becomes pretty null when what’s in the cereal bowl is the nutritional equivalent of a Penguin bar. 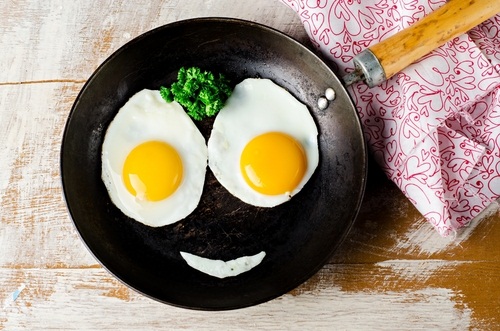 Getting your offspring off to the best start each morning doesn’t require slaving at the stove over weird-sounding health store ingredients, either, though; according to research, the answer to a decent breaking of the fast is as easy as eggs – literally.

A recent study found that 8-to-10-year-olds who ate a 350-calorie breakfast of eggs consumed less at lunch and remained fuller throughout the day, even after playing physical games, compared to kids who ate comparable breakfasts of cereal and oatmeal.

Besides being effective in warding off a killer case of the hangries, egg eaters cut their lunchtime calorie intake by 70 calories, being less likely to cram in food their bodies didn’t necessarily need – which is important; not only in preventing childhood obesity, but also in setting up healthy eating behaviours for later in life.

The secret of eggs’ super powers is that, being a protein, they boost the hormones that keep hunger at bay. Basically, other forms of protein would work just as well, yet eggs are packed with other nutritional rewards that might be remiss in a rasher of bacon, for instance. For those with egg allergies, the standard breakfast staples of milk and yoghurt still provide some protein-rich benefit, whilst quinoa (you know, that weird-sounding health store stuff) is a particularly bang-up alternative.

If you’re concerned that you don’t have the time to cook some sunny-side ups before the school-run, consider hard-boiling the night before. Also, taking an extra few minutes each morning to fry, scramble or boil a few eggs will also teach your young ones the importance of placing precedence on what you shove in your maw each morning.