Hurts Like a Mother: A Cautionary Alphabet – the Bedtime Book for Mums Only

You’re never too old to brush up on your ABCs — at least not when it comes to this hilariously irreverent version; the perfect bedtime story for after lights out… 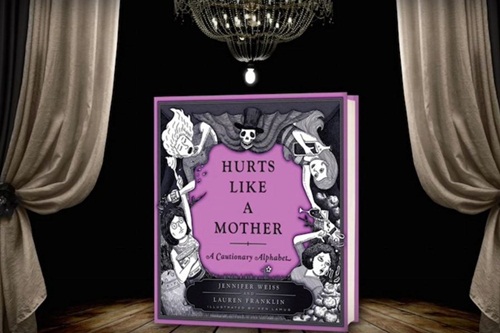 The ingenious creation of Jennifer Weiss and Lauren Franklin, Hurts Like a Mother: A Cautionary Alphabet takes you through the perils of parenthood one letter at a time, cleverly mirroring the macabre lyrical form and subversive theme of the Gashlycrumb Tinies.

Inside Hurts Like a Mother, the fate of mums includes the dread incurred by warnings of a snow day, the toll that co-sleeping takes on parents’ ‘sexy time’, death-by-ennui from reading too many parenting books, the asphyxiation risk posed by inflating a sea of pool toys – and the inevitable for mums of tweens/teens; dying of shame after discovering your kid’s less than savoury texts.

Superbly paired with each morbid verse are the delicately grim, Gorey-esque illustrations by Ken Lamus.

Just like the various versions of Victorian child demise in the Gashlycrumb alphabet poem, the pitfalls of mumhood in Hurts like a Mother aren’t far from reality – only comically rendered so that, as the blurb goes “you laugh and don’t cry (or die)”.

An excellent gift of commiseration for any mummy friend, check out the book HERE.