Our favourite post of the week is written by Kylie, author of Not Even A Bag Of Sugar.

Kylie, the mum of a gorgeous little boy who was born at 27 weeks, uses her blog to share experiences, not only of pre-eclampsia and premature babies, but of anything that inspires and touches her. 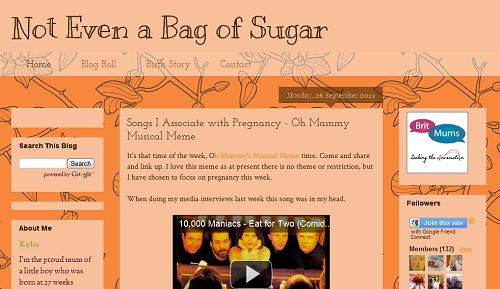 Read Kylie’s take on separation anxiety; something that affects both toddlers and mums.

How the tables have turned. When Joseph was born, I felt acutely that he wasn’t with me. The first pangs of separation anxiety. I couldn’t bear the fact that my precious baby wasn’t with me. It was horrendous. Every time I left him my heart just pained, that he was laying there, all on his own, in his little plastic box. It has taken me a long time to get over those feelings of separation anxiety.

Joseph was a reasonably laid back baby, he would happily go to anyone (though only mama was allowed to give him bottles and food). I was taken by surprise when separation anxiety hit at around one year corrected, If I dared to go to the toilet at a friend’s house, Joseph would let fly, dragging himself to the bottom of the stairs screaming like a diva. At first his separation anxiety worried me. It was so out of character. Unfortunately, it was to get worse. On the odd occasion I had to leave him, as he got older, it got worse. Now his separation anxiety is still very acute.

Joseph has just started a pre-school placement. I applied, through my local sure start centre, for 2 year old funding. This is allocated by our local council to children who would benefit from pre-school input. I was suprised, and pleased to be given this opportunity to send Joseph to pre-school. Having no extended family means Joseph hasn’t had much input from anyone other than myself (and my husband too but to a much lesser extent). I do take him to various activities, however, these are a little limited now he is 2 and most children are in full time nursery.

The first day I took him, I was pleasantly surprised. He went straight to the mat in the corner and started playing with a train set. I went and kissed him goodbye and he didn’t look up. So I assumed all would be well. His session is “only” three hours, so I thought he would be fine. How wrong could I be. Just short of two hours I got a call “Joseph is going into melt down, you need to come and get him”. I got there and saw my darling boy, playing with cars with his key worker, with tears still stinging his eyes. He grabbed on to me for dear life. I felt crushed.

The second day we agreed to take him for two hours. When I dropped him off he clung to me and sobbed very loudly. It was heart-breaking. But I kissed him goodbye and left. He made the two hours, but nearly tore a hole in the carpet to come and get me. He was in such a tizz he said a full sentence, which is very rare “mummy I draw picture of Uki!” I was cheered that he appeared to have a good time.

Unfortunately we only got two sessions in before our holiday. I was a bit torn, do I put him in just for the Friday or write the whole week off and start afresh. I decided to put him in for Friday, my rationale being that a whole week seems daunting and perhaps Monday would be easier if he’d been in on the Friday.

This time the sobbing started as we got to the door. My heart sank. Waiting to go in he went ballistic. “Mummy don’t go” it was awful. His words are suddenly forming more and more sentences. As I took him into the main room it got worse. His clinging turned into claws digging into my leg. The manager suggested I take him home. But I didn’t really want to, concerned that if we start giving in, it’s going to take even longer to get him settled.

So I left, on the understanding I wouldn’t go so far. So I went to Tesco (a tiny little version), the post office, the pharmacy, and by then 30 minutes had passed and no phone call. So I walked home, looking at my phone every 5 minutes. No call. I went to collect him at 11.15. The manager came out beaming from ear to ear. She managed to extract Joseph from the snack table. He took one look at me and said “no, stay here!” The manager said he’d had a fabulous time, settled quickly and didn’t give me a second thought.

The manager was so happy. And to be honest, so am I. I don’t want my child sobbing in the corner for 3 hours. I want him playing and enjoying his time with different toys and new faces, and getting used to a range of other grown-ups.

But I love that snuggle when I pick him up and he says “oh my mummy”.