At birth, babies receive a hearing test, and then again at regular intervals during their development. It’s an important test because any impediment to hearing can obviously have a big impact on your child’s experience of the world—and early intervention can make a significant difference. 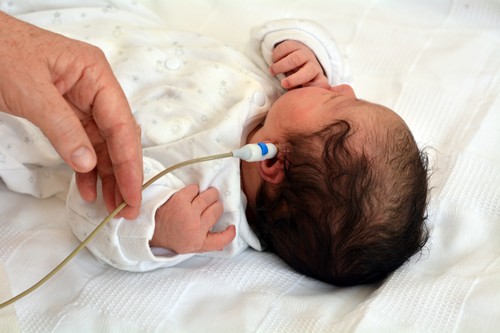 The potential causes behind hearing issues are numerous, but the most typical include:

Being born with a hearing impairment is not common—1 to 2 babies in every 1,000 in the UK—but if it does happen, it’ll either be present at birth, or manifest within the first three years of life.

The hearing tests conducted by audiologists usually consist of the following:

The initial test for babies up to six months is called otoacoustic emissions (OAE). A small ear piece is fitted into the ear canal which emits a clicking noise—to which a healthy functioning cochlea (inner ear) should respond. The ear piece will then record the response, which will be checked by the audiologist.

“Hearing tests for babies can be done whilst your baby is fast asleep and will tell us whether their ears and hearing systems are working normally,” says Vicki.

If no cochlea response is picked up during the test, an auditory brain stem response test (ABR) will be conducted, which entails placing headphones on baby to play the same clicking noises. Electrodes will record the level of the frequencies your baby can hear at.

So what are the signs if the newborn hearing test doesn’t pick up a problem?

“After birth, it’s very much to do with the physical development of the child as well as their attention,” explains Vicki Kirwin, Development Manager (Audiology & Health) at the National Deaf Children’s Society (NDCS). “You should be given a book called The Personal Child Health Record, which has a checklist inside of things to look out for, including reactions to sounds, to make you think, ‘Is my baby doing that or not?’”

However, if you aren’t sure, don’t rely on your own analysis—always consult a specialist.