In 1931 Thomas Smith, a Professor of Pharmacy and a retail pharmacist in Dublin developed a unique cream from the back of his humble shop. The healing cream was excellent at treating nappy rash, eczema, pressure sores, incontinence rash and a variety of other minor skin lesions.

The soothing cream goes from strength to strength, eventually becoming known as Sudocrem.

A promotional strategy of personally delivering Sudocrem samples to new mothers turns the product into a steady seller in Ireland.

Improvements are made to the marketing and distribution resulting in a doubling of sales over the next 4 years, allowing Sudocrem to be introduced into Northern Ireland and Northwest England.

Sudocrem was launched nationally in Great Britain and over the next 20 years quickly established itself as the market leader for nappy rash cream in the UK and Ireland.

Sudocrem launches a Skin Care Cream for teenagers and adults!

Sudocrem celebrates 80 years of skincare for all the family. Sudocrem products are now available in over 40 countries worldwide.

Sudocrem Care & Protect for the prevention of nappy rash is launched.

Still manufactured in Dublin, the Sudocrem formula has withstood the tests of time and remains unchanged from its humble origins. 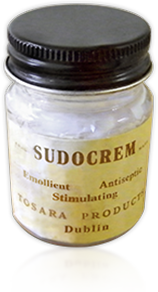