No matter how many books you’ve read or classes you’ve attended we know that once your baby arrives you might be too busy settling into a sleep-challenged routine and recovering from the birth to remember some important things about the first few weeks at home.

If breastfeeding, you will produce a special first milk called colostrum which will feed your baby over the first three days.

Once the milk feeds are established, usually by the third day, your baby’s stools start to change in appearance. They have a loose, yellow texture with a ‘mustard seed’ appearance. Bottle fed babies tend to have firmer poos.

A new-born baby will wee or poo every one to three hours. However, as most new-born babies do not cry when they need changing, regular checks every couple of hours and before and after a feed are advised to avoid the onset of nappy rash.

A baby’s first poo is called meconium and occurs over the first few days until milk feeds are established. It is sticky, with a tar-like appearance and can make your baby’s skin sore if left in the nappy for too long. A good tip is to use olive oil to help remove meconium from tender skin, followed by a barrier cream if necessary.

Your baby can only focus on objects up to about 8 to 12 inches away; equal to the distance from breast to your face.

Initially, your baby has blurred vision and will show a preference for bright, contrasting colours such as black and white patterns.

Newborns need 15 to 16 hours sleep a day, but will wake up every three to four hours for feeds. Remember to put your baby down to sleep with a clean, dry nappy to avoid soreness and nappy rash.

Babies can lose as much as ten per cent of their birth weight during the first few days after birth until feeding is established, with a return to birth weight at around the second week.

After that, a gain of about an ounce or 28g a day is normal. 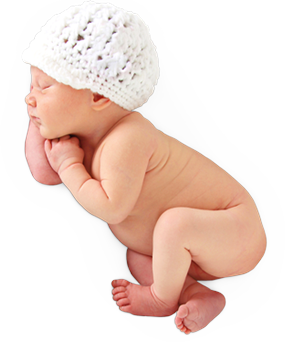